Tucked behind the bustle of Main Street in Manayunk, just beyond the towpath and canal sits an island performing arts and recreation center. The design is modern and dynamic, a beautiful clean space for the community to come together. While most are struck by the impressive architecture and sculpted gardens surrounding it, the most noteworthy element of the island lies beneath it: a subterranean stormwater runoff tank with an ability to hold nearly four million gallons of water.

The impetus for the center as it exists today dates back to 2004 when the federal government issued a mandate to the Philadelphia Water Department (PWD): bring the city into compliance with the Clean Water Act by stopping the overflow of sewer drainage that occurs during periods of heavy rainfall. To accomplish this, PWD had to install a retention tank for the stormwater overflow big enough to hold the excess. Finding a location suited to hold a tank this large, along with the corresponding pump house to operate it, was a difficult feat of planning. In assessing available land options, they began to eye Venice Island and the crumbling structure of a city recreation center sitting atop it.

Venice Island has a long history of utility to our city. In 1857, it became home to a fabric mill producing cotton yarn and material for the thriving carpet weaving industry in Kensington. This was just one of many mills in Manayunk. The canal became a vital artery of shipping not only the array of fabrics milled throughout the hills of Manayunk, but also coal mined in Northeastern Pennsylvania.  As these industries shifted overseas, the mill on Venice Island shut down and fell into a state of near abandonment. In the 1960s, the city constructed a recreation center, basketball courts, hockey facilities and a pool. The facilities were well used in their time, but as community usage declined, so did day-to-day maintenance. By the early 2000s, the space had taken on an air of desolation, frequently graffitied and littered with the evidence of unsanctioned after hours activities. After over 40 years of use, it seemed possible that the structures would be better replaced than repaired. In 2004, PWD needed a place for a massive tank, the community wanted a new rec center, and the talks began.

Over a period of eight years, conversations between the PWD, Parks & Recreation, Manayunk Development Corporation and community members took shape into concrete plans. The imperative became clear not only to provide a site for overflow tanks, but to create a space that would fundamentally function to address the issues of the flood prone area. Planners excavated and planted the overflow tank beneath the island, the only visible evidence of which is the pump station that includes a tower of windows designed to maximize natural light and reduce energy usage. The top is equipped with a green roof. The storage tanks beneath it are roughly the size of 180 SEPTA buses and retain surplus until the sewer system can catch up on the influx of stormwater. Once it has, all of that water is pumped back into the sewer system for treatment.

Looking at the architecture of the grounds, it is clear that water has played a pivotal role in the planning. Rainwater is directed in an intricate, graceful path where it ultimately diverts into rain gardens surrounding the theater, parking lots and pathways below. The undulating lines and curves of these rainwater channels deliberately invoke the movement of water in their design. Mural Arts Philadelphia brought their artistic vision to the project, and artist Eurhi Jones completed an installation entitled “Waterways” that stretched across Manayunk for roughly 10 blocks, paying tribute to the water-dwelling wildlife in the area, with the intent of creating a pathway of images for residents to follow to the island. The installations throughout Manayunk were temporary, but her work permanently adorns the terraced rain garden with vinyl images of flowing water and shad. 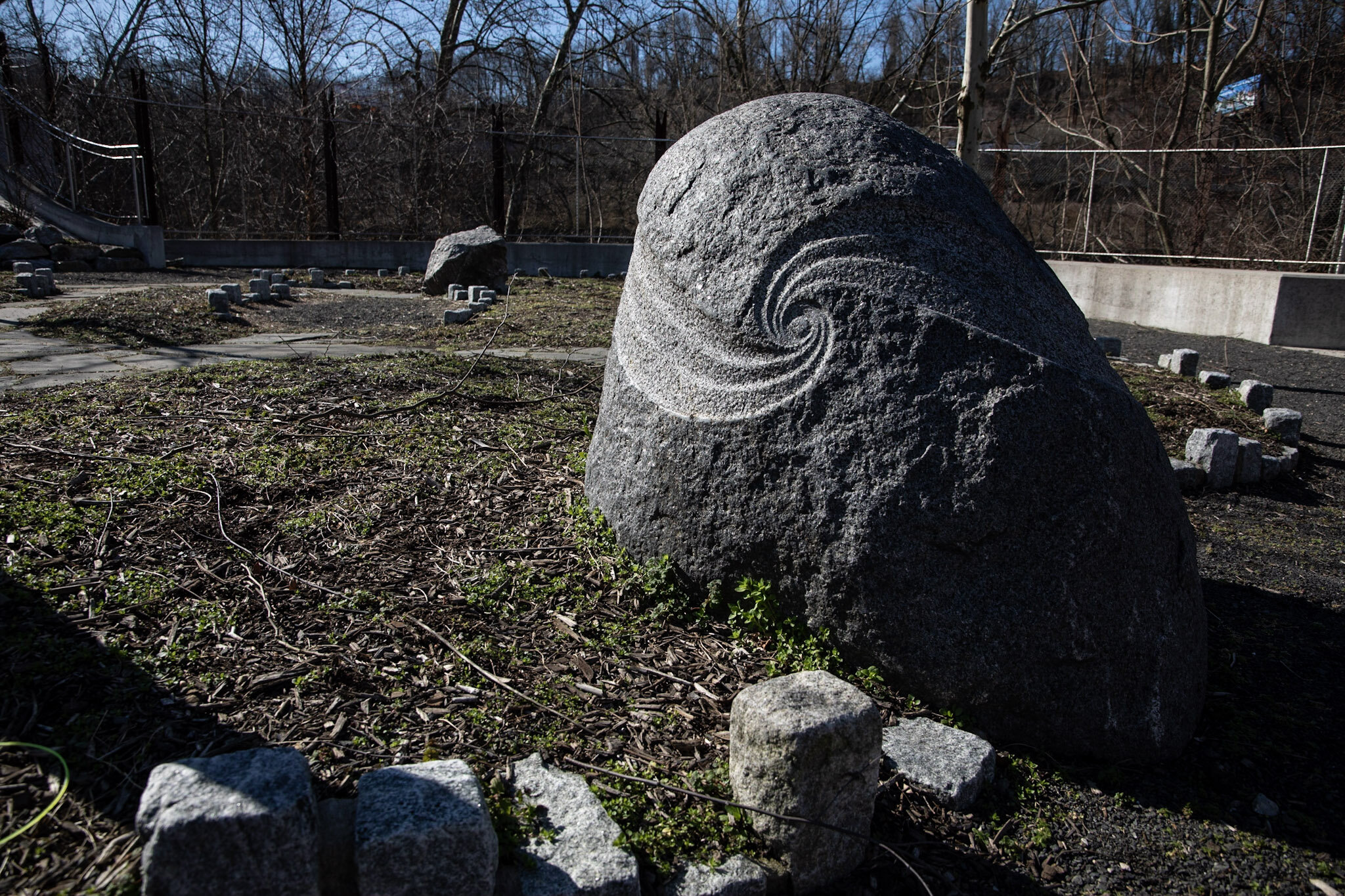 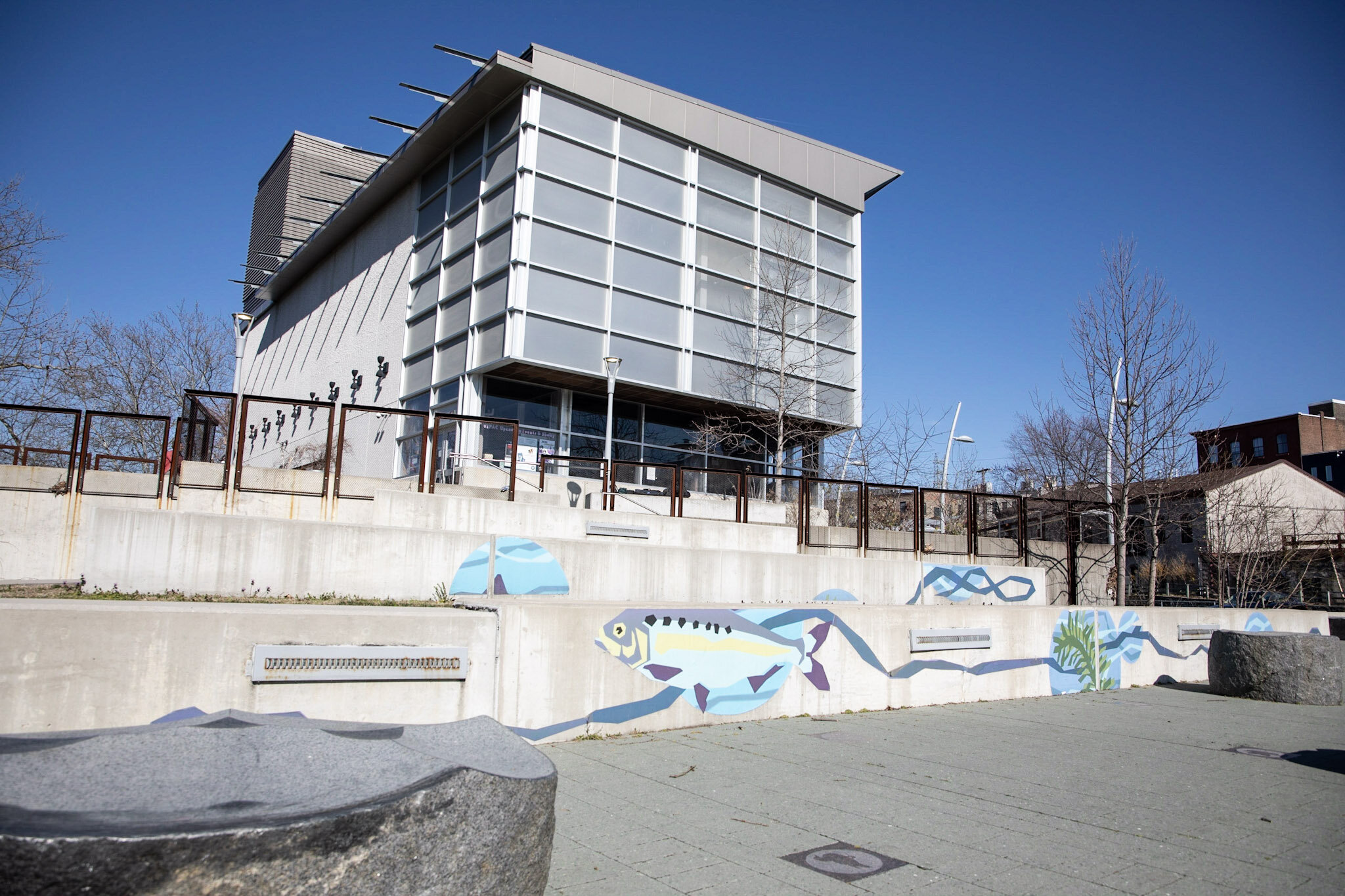 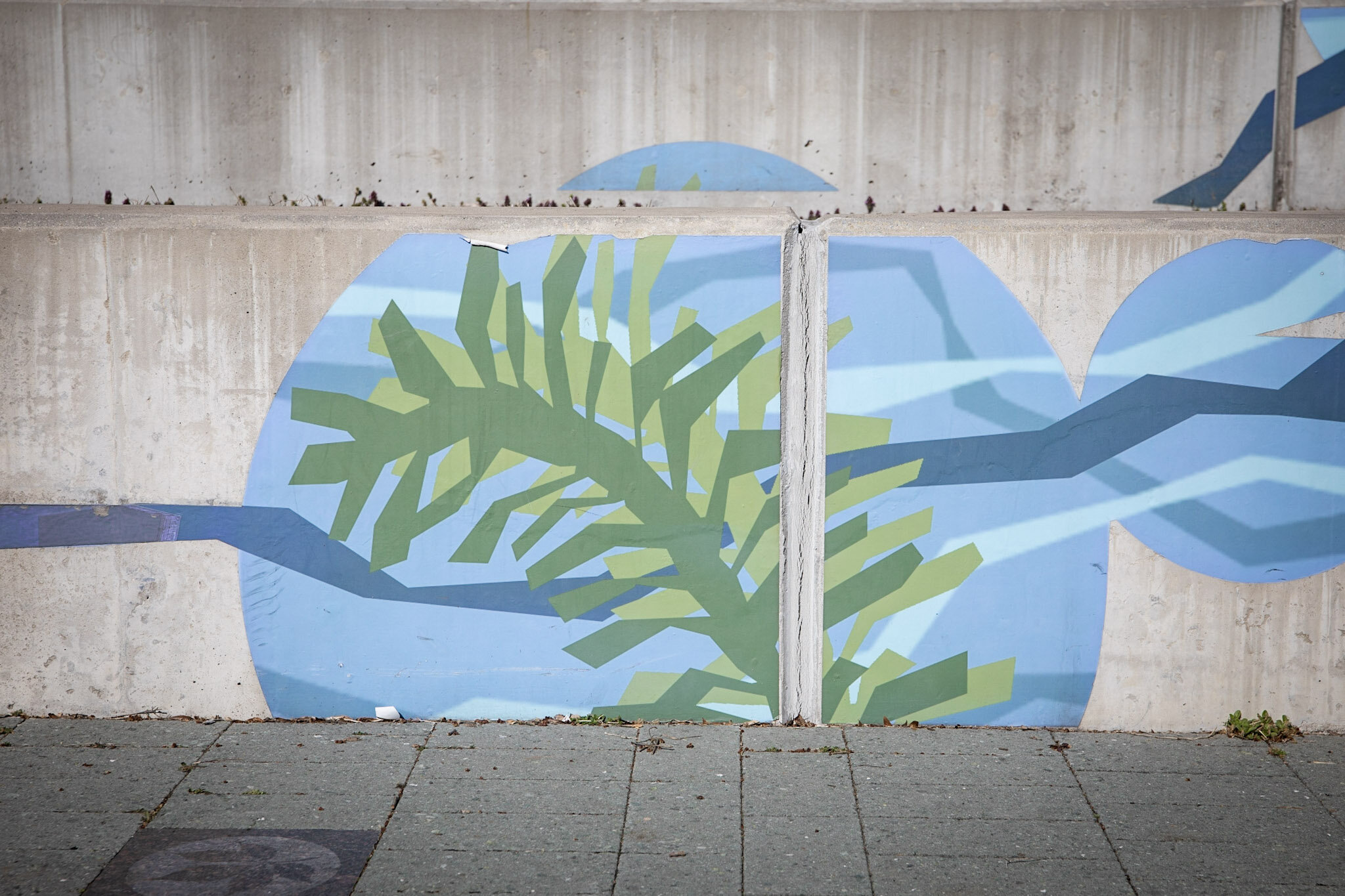 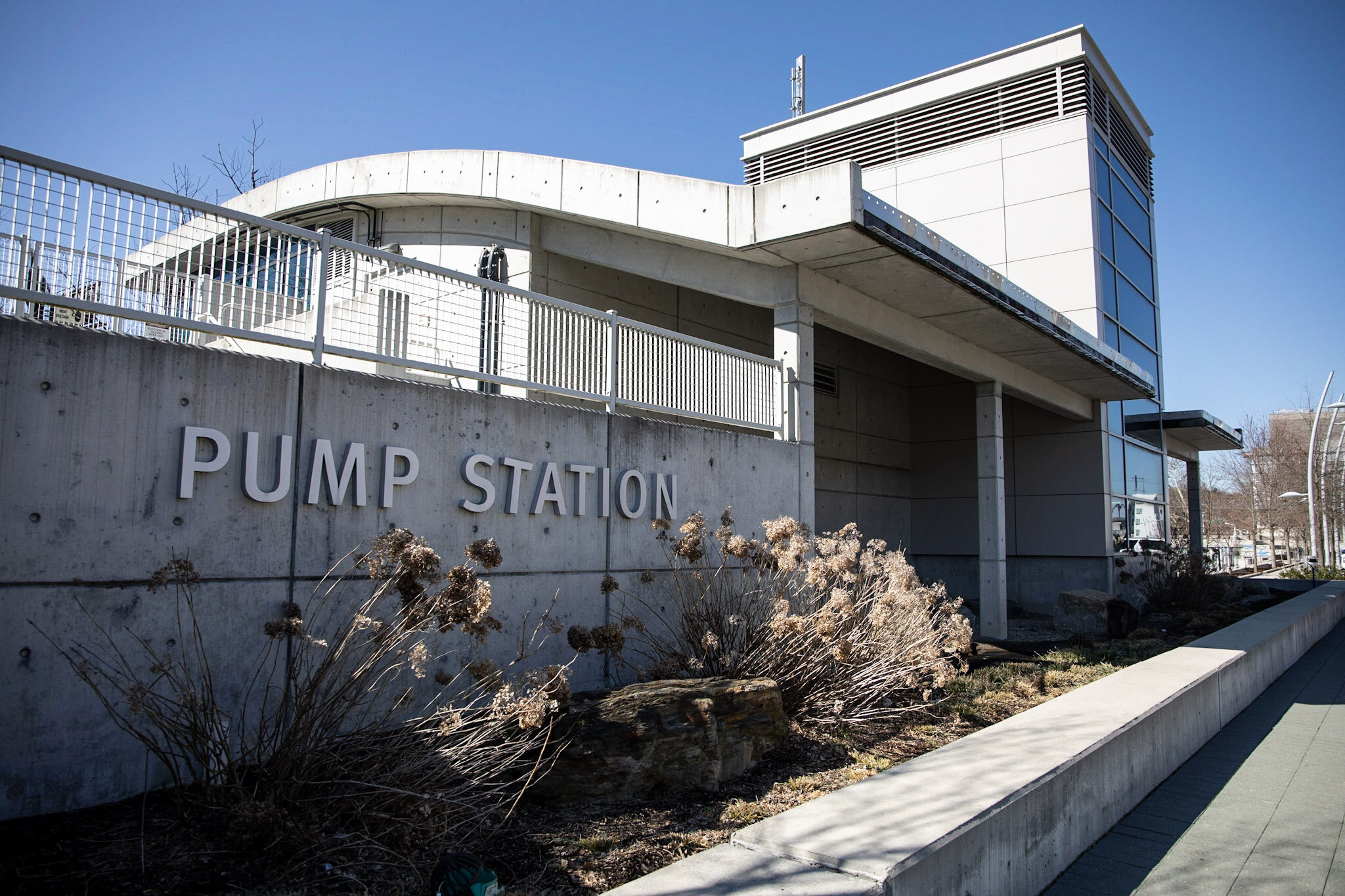 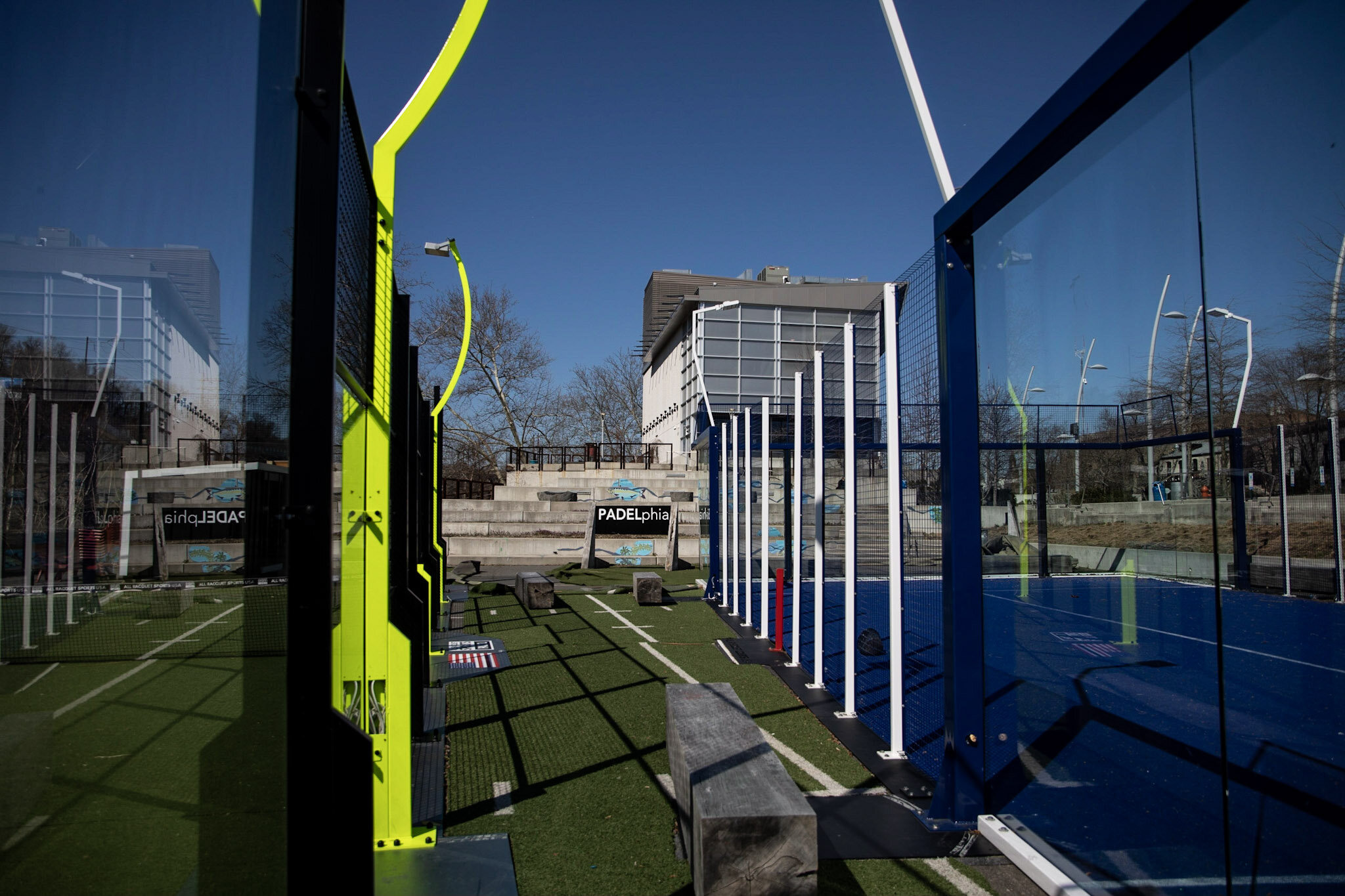 One of the things that makes Venice Island such a remarkable place is the comprehensive thoughtfulness of the design. Large sections of green roof, the handiwork of Philadelphia-based landscape architecture firm Roofmeadow, were installed on both the pump house and community center, aiding water consumption on the island by filling cisterns and channeling runoff into the garden trenches throughout. In the planning process, Andropogon, a landscape architecture and ecological design firm with a location in Manayunk, retained as many existing trees as possible and integrated existing boulders into elements of design in the gardens. They carved and carefully situated chunks of the bedrock removed to make way for the underground storage tank.

The environmental innovation of the island’s design has garnered recognition from the community. In 2015 alone, it received the Groundbreaker Award from the Delaware Valley Green Building Council for its excellence and leadership in the green building community and industry. Venice Island was also named a 2015 “Best of Philly” winner for Best Urban Space Transformation, as well as Environmental Project of the Year by The Construction Management Association of America’s Mid-Atlantic Chapter.

Noah Herman, Community Partnerships and Arts Curator, beams with pride as he shows off the facility: “What makes this location so unique is its true function as a multiple-use site. You have an underground wastewater storage basin, pumping station, and at eye level basketball and volleyball courts, an outdoor amphitheater, children’s spray park, and an indoor 250-seat performing arts center, with abundant public parking.”

On a recent visit, Herman showed me the many island amenities, including the zen garden, populated with boulders salvaged from the original site, now chiseled with visual nods to the river. He pointed out the splash pads and misters above the stormwater garden, designed to further celebrate water in the landscape design.

Herman found his way to Venice Island through a love of theater. He happened to connect with the city’s human resources department just at the moment when they were hiring for the newly-created position that he now inhabits. Before Herman, all of the programming for the theater and outdoor events was handled by Parks & Recreation staff. “Up until now, we have been run by our rec leaders. We have two rec leaders just like every other rec center in the city. They have been the stage managers, technical directors, sound designers and production managers, and they have been fantastic, but they juggle all of this with doing everything else required just to keep the doors open and maintain the grounds.”

“I hope to make this a viable regional theater with expanded innovative programming,” adds Herman. He has plans for a Shakespeare by The Schuylkill summertime series and a play about watershed issues which will “celebrate the beautiful outdoor space and tie in to the multipurpose nature of the facility, giving a platform to the integrated purpose of sustainability shared with the theater.”  “I mean, how many community theater and stormwater management centers do you see?”

Planting our own gardens is one way we can exercise control throughout the COVID-19 crisis.

Connecting with the Black permaculture community after many years.