When Craig Johnson saw his neighbors getting picked on, he knew he had to get involved. It didn’t matter a bit to Johnson that his neighbors were snakes.

Johnson lives in Glen Fern, a historic house dating back to the mid-1700s that sits at the end of Livezey Lane—a street that is crossed by the Wissahickon’s Orange Trail and is close to Devil’s Pool, a popular swimming hole. Although Glen Fern is the last house on the Lane, a den of northern water snakes occupy a prime bit of real estate a few yards just beyond at the base of an old stone dam on Wissahickon Creek.

The dam, known as Livezey Dam, features a sunny southwest exposure with easy access to the water, perfect for basking or, in the spring, spending some intimate time with members of the opposite sex. To be specific, water snake mating usually consists of one of the heftier females in the middle and a group of the smaller males wrestling with each other to actually seal the deal, yielding what is commonly called a “mating ball.” 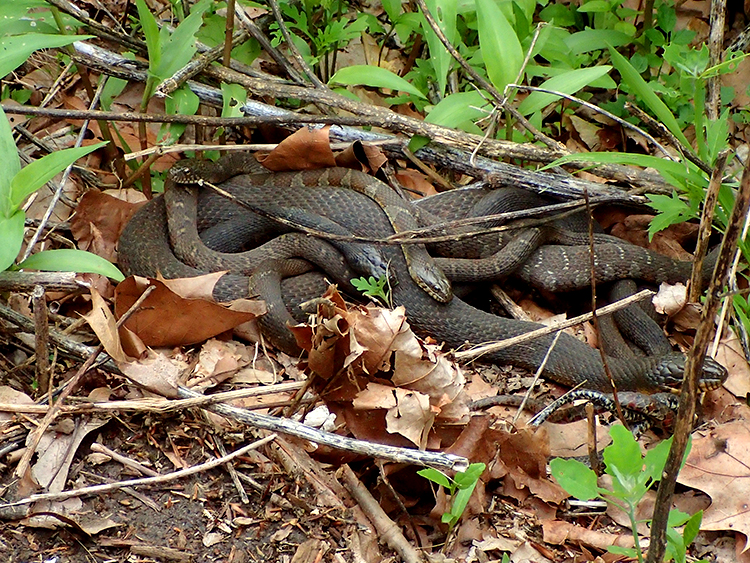 Northern water snakes, as the name implies, also spend a lot of time in the water, swimming and hunting for fish and frogs. The dam’s location on the water makes it the perfect home base for such excursions, and its stone construction offers endless cozy cracks and crevices great for hibernating during the winter or sleeping the day away in warmer weather.

The only problem with the dam, from the water snakes’ perspective, are all the hikers and bathers walking past it.

Northern water snakes are practically harmless. If you’re so inclined (and I often am), you can pick one up and lose only a little blood to their needle-like teeth. In the end, the copious musk and poop the snake smears on you will make you forget the bite.

Of course, if you’re not inclined to pick one up, it will just sit there or escape into the water. It wants nothing to do with you.

Unfortunately for the water snakes, which are chunky with dark reddish-brown blotches on a dark gray background, they do slightly resemble the venomous water moccasin (aka the cottonmouth), which live nowhere near Philadelphia. The closest they range is southern Virginia. Nonetheless the resemblance is enough to make the benign water snake a target, particularly for ignorant young men showing off for their friends.

Johnson saw visitors harassing the snakes as soon as he moved into Glen Fern in 2010 and personally intervened when he could. More recently, though, Johnson observed an increase in snake activity as well as increased harassment of the water snakes as Devil’s Pool became more popular.

“Three years ago was the time we had the most confrontations with visitors abusing and killing the snakes,” Johnson says, and sometimes visitors would become heated when he stepped in to stop the abuse.

In January of 2018, he felt called to take more drastic action.

“I had this dream where the snakes came to me and said, ‘You’ve befriended us. Could you help us have a safe place at Livezey Dam?’ ” Johnson recalled.

The snakes picked the right dreamer.

Johnson is the executive director of Interpret Green, a studio that creates nature habitats for parks, libraries and schools, “so students can go out every day and have a nature experience,” he says. “I’m a ‘habiteer.’ I create habitat.”

Johnson fought back against the snakes’ tormentors by turning the whole situation into a learning experience. In the winter of 2018 he worked with Friends of the Wissahickon to fence off the prime basking spots and to create interpretive signage to teach visitors about the snakes (full disclosure, I consulted on a volunteer basis on the interpretive signage).

The “Snake-uary” was such a success in its first year that this past winter Johnson quadrupled its size to about 100 feet by 40 feet and added more snake amenities such as rocks and logs to hide under. Inspired by a female water snake who gave birth in a heap of wood chips in his garden, Johnson added a similar pile inside the fence.

“At least one out of every three or four visitors stops and reads the sign,” Johnson says. “They look in there to see if they see snakes, and they ask questions.”

What they don’t do is beat them up.

The Volta Way: Managing Dirty Shoes in The Home

Obstructed View: A hidden entrance makes the exceptionally designed Barnes feel exclusive– and not in a good way

Greenland Nursery battles invasive plants, one seedling at a time

By Alexandra W. JonesIf you’re thinking that this summer might be a great time to escape

Obstructed View: A hidden entrance makes the exceptionally designed Barnes feel exclusive– and not in a good way

By Rob FlemingIt is a rare day, indeed, when Philadelphia gets a new art museum. Major

This July, Declare Independence from the Pump!

By Meenal RavalFossil fuels are everywhere in our daily lives. So much so that we hardly

By Randy LoBasso Four weeks after 9/11, the Delaware River Port Authority ordered a shutdown of the

The Volta Way: Dear Lois, What if the people you live with don’t care if the house is a mess? Is it actually possible to find balance in the home?

By Lois VoltaThere’s no right or wrong way to run a household, so balance in the