Flight of the Osprey: A bird’s journey from near extinction to your local bookstore

What’s your favorite sign of spring? Flowers blooming? Bees buzzing? Raptors hurtling into the water, talons first, emerging with a wriggling fish to rip apart back at the nest?

Spring has returned to the Delaware Valley, and with it our local ospreys.

Ospreys, sometimes called fish hawks, are large birds of prey with wing spans of about five feet. They have chocolate brown backs, white undersides and a dark eyestripe. 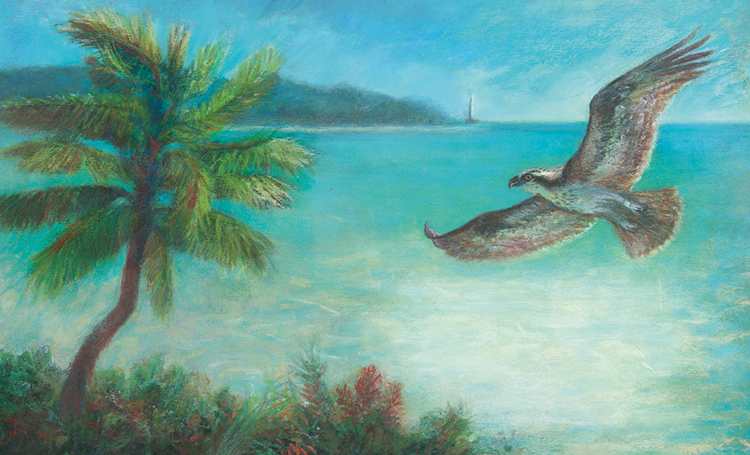 Barbed pads on the bird’s feet help it grip slippery fish. They are “highly specialized to catch fish from the tips of their talons to the tips of their beak,” says  Rob Bierregaard, ornithologist and research associate at the Academy of Natural Sciences of Drexel University. They even orient the fish headfirst as they fly to minimize wind resistance.

According to Bierregaard, you can find ospreys wherever there are fish to catch. In Pennsylvania, that means along our larger rivers and at inland reservoirs, and in New Jersey all along the Delaware Bay and Atlantic shores.

But finding these birds wasn’t always so easy. Their populations were devastated by DDT use in the 20th century. The popular insecticide worked its way up the aquatic food chain, ultimately wreaking havoc on the osprey’s reproductive system. The birds began to lay eggs with shells too thin to keep embryos from drying out. In extreme cases, the eggs would crack under the weight of incubating parents. Osprey clutches failed for decades, and the birds disappeared as the adults grew old and died. Northeastern populations were particularly hard hit. By 1979, Pennsylvania’s osprey populations had been completely wiped out.

The Environmental Protection Agency banned DDT in 1972, leading to improved hatching rates as the chemical slowly disappeared from the environment. Humans also helped ospreys along through “hacking” programs, relocating nestlings from remaining populations to regions where they had died out. Since ospreys return to nest near where they fledge—males stay within about 10 miles and females within about 100, according to Bierregaard—the hacked birds returned to raise clutches of their own, seeding new populations.

Local osprey are now as abundant as they’ve been since European colonization, with 148 pairs nesting in Pennsylvania as of 2016 and 668 in New Jersey as of 2017.

The offspring from these nests fly south in the fall for a “gap year,” Bierregaard says.

They land anywhere from the Caribbean coast to Argentina, where they spend 18 months fishing before coming back north to mate and build a nest—though many ospreys take a few years to actually find a partner and settle down. The birds repeat the journey south in the fall and north in the spring.

Thus, while we were shivering in Philadelphia’s freezing rain and leaping over slush ponds at street corners, our region’s ospreys were hanging out in warm, exotic locales like Brazil or Venezuela.

Around Daylight Savings Time, the ospreys started north. They flew through South America  and Colombia along the Greater Antilles, then traveled up the Atlantic coast from Florida.

Bierregaard has been tracking these migrations since the year 2000. He harnesses radio transmitters to ospreys originating from South Carolina to Newfoundland.

One young female osprey named Belle surprised Bierregaard when she began her first trip to South America with a 1,200-mile leg from Martha’s Vineyard across the Atlantic.

“A neighbor asked me what my favorite osprey was, and I said ‘Belle,’ ” Bierregaard says. “She had done the longest trip we had recorded by then and made it back from Brazil—he said I should write a children’s book about it.”

So Bierregaard teamed up with local illustrator and birder Kate Garchinsky to produce “Belle’s Journey.” The book combines Belle’s real-life voyage with exciting events from three other tracked ospreys, such as an encounter with a hurricane and an overnight ride on a cargo ship.

The real Belle continued migrating south and north after the events depicted in the book. As of 2017, when the battery in her transmitter died, she hadn’t yet settled down with a mate.

To make ospreys part of your own spring, Bierregaard recommends starting off at the John Heinz National Wildlife Refuge.

You can find Belle’s Journey at the Big Blue Marble bookstore in Mount Airy and view maps and accounts of osprey migrations on Bierregaard’s website www.ospreytrax.com.

In Search of the Colored Girl: Germantown museum highlights the overlooked contributions of black women

Playworks designed an online toolkit, Recess Labs, for educators to use to improve their classroom and

by Alexandra W. JonesWhen Facundo Lucci walks into the Reading Terminal Market, he smiles and waves

by Kim PostProgram Manager Alon Abramson calls his workplace “basically a startup.” In many respects it

Recess Rules: In a play-deficient country, how should the children play?

by Claire Marie PorterOn half a city block of pavement in the Strawberry Mansion neighborhood, the

Sewing Seeds: Sustainably-minded owner of textile company has not lost the thread