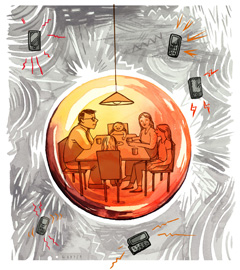 story by Suzanne LevyEvery week, on Friday night, something close to a miracle happens at our house.

My 12- and 15- year old stepdaughters turn off their cell phones, unplug from Facebook and step away from the TV. My four-year-old daughter even stops whining to play a game on my computer.

The reason? Our humble tradition of a family night—an evening with no distractions or technology.  It’s a tradition we’ve followed for four years now, after I realized our hectic weekday evening schedule was becoming a blurred Groundhog Day-like jumble of dinner, homework, TV, computer, texting, Facebook, drives to and from activities, and mercifully, bed.

Even on weekends there never seemed time to just be together. So, drawing on a tradition from my Jewish heritage, I suggested we have a family dinner on a Friday night, like the ones I had with my parents growing up. I wanted to light candles, say blessings over wine and challah, and have a relaxed dinner.

Initially, my partner Steve balked. Steve had grown up Jewish, but is now atheist, and his children aren’t Jewish. How would they react to such a crazy idea? But he liked the idea of a distinction between the worries of the work week and the warmth of the gathered family, and agreed to try it.

I also suggested we bring in a few other elements from the Jewish Sabbath. In orthodox Jewish homes, for 25 hours, there is no use of technology, even switching on lights is prohibited (a time switch is used). We weren’t going to be that extreme, but I could see some sense in a “technology fast” for a few hours.

So we tried a family night with no technology and discovered several things. By excluding technology your focus naturally goes to the people you’re with. You can talk and listen to each other, rather than entering the alternate reality of TV shows. And there are no deadlines, no imperative to reply to people, make plans, think about tomorrow, or do anything except enjoy the food you’re eating and the people with whom you’re sharing the meal.

We also discovered a new ability to be grateful. The underlying motivation of the Jewish blessings is to express gratitude to God and the universe, for providing the food you’re eating—and for the world, and life itself. My atheist partner wasn’t interested in this, but he wanted to encourage the idea of gratitude. So we began going around the table and asking everyone what they were grateful for that week.

The answers have been fascinatingly varied over the years, ranging from “it’s Friday” to “no more math tests” to “having a partner in my life who’s got me through some pretty tough times this week,” or “a daughter who makes me so proud with her hard work and determination.” Sometimes it’s music. Or sunshine. Somehow going into a place of gratitude makes the week slow down even more. Time is precious. Life is precious. This matzoh ball soup is precious.

After dinner, when we would normally scatter throughout the house, we stay together and play music and games. (With no TV or computer to turn on, what else is there to do?) Steve gets out his guitar, taking requests—apart from a ban on Justin Bieber, he’s pretty versatile—and the 12-year-old prepares dessert, usually strawberries and whipped cream, arranged on the plate with ever-changing ingenuity.

Then we play Apples to Apples, Pictionary, Game of Life or something new someone’s heard about. We laugh, take sides, become outraged and triumphant. These moments draw us closer, becoming stored-up memories to shore us against the energy-depletion of the coming work week.

The older girls, as they begin to socialize with friends and have school dances or parties, are now often invited out on Friday nights. Amazingly, they’ve sometimes been slightly reluctant to relinquish a family night. They go out, of course—at this age, friends will win over everything—but the fact that they even for a moment consider staying with us is really quite an achievement in this wired age.

SUZANNE LEVY is a journalist and TV producer from Cherry Hill, N.J., who is constantly on the lookout for ways to sustain her soul.

Founded in 1966 as a program of the Bicycle Coalition, Neighborhood Bike Works is now the

story by Shaun BradyIn 1972, there were no bike lanes in Philadelphia. There was no way

story by Char VandermeerHeat can beat even the most conscientious of gardeners. All it takes

story by Samantha WittchenFACT: Americans are estimated to buy as many as 12 million car seats