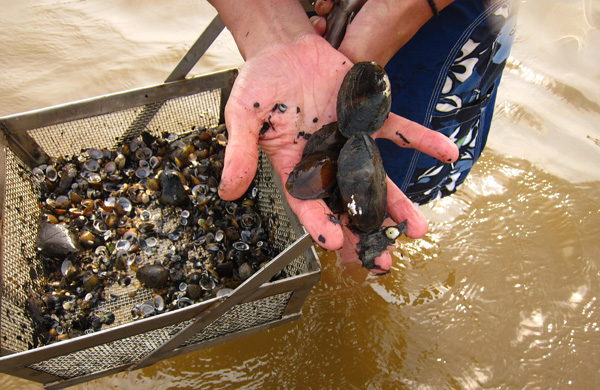 story by bernard brownWho’s got the best mussels in philadelphia? Sure, the Saison Dupont-bathed Ghent bivalves at Monk’s Café are divine. But by far, Philadelphia’s most interesting mussels are out in our rivers, buried in the mud.

On a sunny morning in mid-June, I found myself sitting in a boat anchored in the Delaware River shallows off Northeast Philly. I watched researchers from the Academy of Natural Sciences and the Partnership for the Delaware Estuary bringing in mesh dive bags bulging with rare freshwater mussels.

“These animals might be 80, 100 years old,” said Danielle Kreeger, the Partnership’s science director. The younger ones were a little flashier, in green, orange or yellow. Roger Thomas, section leader at the Patrick Center for Environmental Research at the Academy, showed me an old-timer up close—rough black shell scraped to white and shiny silver where the shell bulged on either side of the hinge.

That big mussel started its life as one of thousands of itty bitty larvae ejected from its mother’s shell, and was incredibly lucky to latch onto the gills of a passing fish. There it rode with its “fish host,” filtering plankton as the gills around it traded carbon dioxide for oxygen. Eventually, maybe during the Wilson administration, it bade farewell to its host and dropped into the mud.

Along with about a hundred of his fellows, this mussel would be scrubbed clean, marked with a tiny electronic tag, and relocated to Ridley or Chester Creek; they were about to become mud pioneers that would tell researchers whether the creeks could again support proper mussel beds.

Have I mentioned some of these mussels were pregnant? The researchers (the effort also includes Cheyney University, the U.S. Geological Survey, and the U.S. Fish and Wildlife Service) had timed this mussel gathering mission so that larvae would be released in the new creeks. Later surveys for juvenile mussels will tell us more conclusively whether the creeks were making a comeback.

So, where had all their mussels gone? As you might expect, a couple hundred years of pollution has something to do with it. But remember those fish hosts? Our region’s creeks are blocked by scores of dams, some creating reservoirs, some left over from long-forgotten industrial projects. If the fish can’t get up and down the creeks, neither can their baby mussel hitchhikers.

I know what a lot of you are thinking: “This is all very interesting, but can you eat them?” Yes, but they reportedly taste like mud and tend to host all kinds of interesting parasites. Not to mention that anything filtering Delaware River water for several decades has built up a scary load of toxic chemicals from the waterway’s ugly past.

Overall, the U.S. has about 300 freshwater mussel species; 40 percent are in danger of extinction. And there’s a lot more mussel work to be done out in the Delaware. In 2010, the research team found a species previously thought to be locally extinct, the Tidewater Mucket. The last comprehensive survey for Delaware River mussels was performed in 1919, and, as Thomas pointed out, the recent surveys have only looked in relatively shallow water. There’s no telling what mussel beds sit in the channel.

Bernard Brown is an amateur field herper, part-time bureaucrat and director of the PB&J Campaign (pbjcampaign.org), a movement focused on the benefits of eating lower on the food chain. Read about his forays into the natural world at phillyherping.blogspot.com. Pick up next month’s issue to honk it up with geese.

Rivers, pools and lakes are waiting to refresh your body and spirit