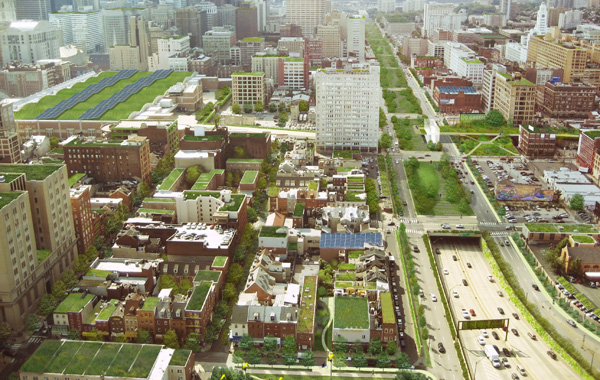 story by liz pachecoWhen Philadelphia received a mandate from the Environmental Protection Agency (EPA) in 1997 to improve its combined sewer system, the initial solution wasn’t so great. The plan called for replacing old pipes, building more tunnels—using manmade constructions to better handle stormwater. Streets would be dug up, improvements would be made mostly underground and waterway restoration would take a long time. And renovations were expensive.

Residents couldn’t see, nor really appreciate the improvements, says Joanne Dahme, PWD’s manager of public affairs. And “they might not have gotten the total investment they deserve.”

A better plan was needed. For old American cities like Philadelphia, the combined sewer system is a common problem. In combined systems, stormwater and sewage flow together in a single pipe; during heavy rains or snowmelts, the system can be overwhelmed, resulting in flooding and waterway pollution.

Faced with an aging sewer system and an EPA mandate, the PWD went for a new approach: Go green.
“Lead with the green,” is the phrase Dahme uses when discussing Green City, Clean Waters. She calls the just-approved, 25-year, $2 billion plan “revolutionary,” explaining that Philadelphia is “probably the first city in the country to really take this green approach as [a] primary approach.” Cities across the country are using tools like rain gardens and porous pavement to keep water out of the sewer system, but not to the extent Philadelphia plans.

The Green City, Clean Waters plan, announced in 2007 and officially approved by the state this summer, pledges to install as many green features as possible. Over the next 25 years, tools like porous pavement, rain gardens, rain barrels, sidewalk planters and stormwater tree trenches will help capture and manage Philadelphia stormwater. The plan is about “adding layers of Mother Nature that once existed [but] that we long [ago] erased,” says Dahme.

Updated wastewater treatment facilities and pipe renewal are also part of the plan, but the hope is that the green features will keep water out of the sewer system altogether. Other benefits of Green City, Clean Waters: Waterways will be more quickly restored, and residents will more readily see and enjoy the improvements.

Even before the state approved the plan this summer, the PWD had been working with private companies, local organizations and communities to implement these green stormwater solutions. The first porous street was built last May in Queen Village on South Percy Street, and rain gardens and stormwater planters have been popping up all over the city. To keep track, the PWD has created a Big Green Map Tool, which conveniently shows all green water projects in the city.

“We believe [Green City, Clean Waters] is the best public investment,” says Dahme. “For every dollar invested is a dollar gained in community investment to make a better city to live, work and play.”