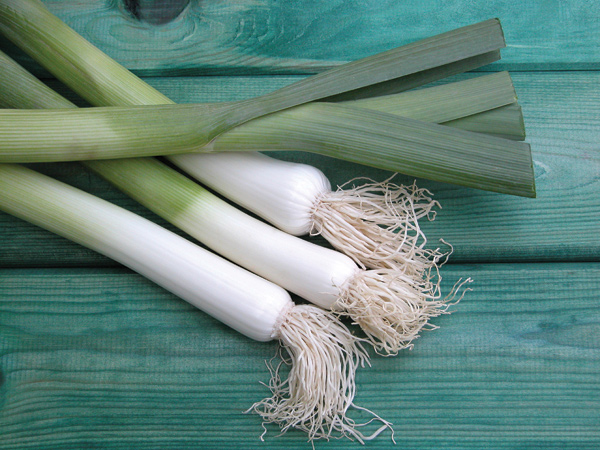 Having grown up in a leek-less household, I find them endlessly intriguing—in no small part due to their resemblance to obese scallions. But leeks are so much more than portly onions; they have an amazing rich, mellow flavor and a dynamic range of textures, depending on how they’re cooked.

A member of the Alliaceae family, which also includes onions, garlic, ramps and elephant garlic, among others, leeks have a long and storied tradition in Europe. They are one of the national emblems of Wales, and in France they are ubiquitous.

One of the reasons for leeks’ popularity is their strong constitution. Many varieties can survive in very cold ground through the winter months. A vendor at a recent Piazza Winter Farmers’ Market told me that his French leeks actually get sweeter the lower the temperature drops.

There is really only one challenge to working with leeks—the grit. When you slice open a leek, its concentric rings look a bit like the cross-section of a tree. Because of the way they grow, the individual layers can trap dirt. Fortunately, there is a simple trick for eliminating the problem.

This method works if you’re using leeks in any sort of chopped form (as is the case in most recipes). Just fill a mixing bowl with cool water, chop your leeks (only the white and pale green portions are edible) and dump them in. Using your hands, separate the rings. The leeks float, but after a few minutes all the sediment sinks to the bottom. Now, all you need to do is skim the cleaned slices out of the water, and you’re good to go.

The most wonderful thing about leeks is their versatility. They can play the part of aromatic in stews, soups and braises, but they can also step to center stage as the featured player. The saucy goodness of leeks slow-cooked in butter and white wine make a wonderful pairing with pasta. (Bacon wouldn’t be a bad invite to that party either.) Cooked gratin style with gruyere and cream, they make a delightful side dish for roasted or grilled meats. Tried-and-true preparations include potato leek soup (a great way to use up those storehouse tubers) and quiche (leeks are lovely in any egg dish).

Raising livestock for food can be a regenerative enterprise