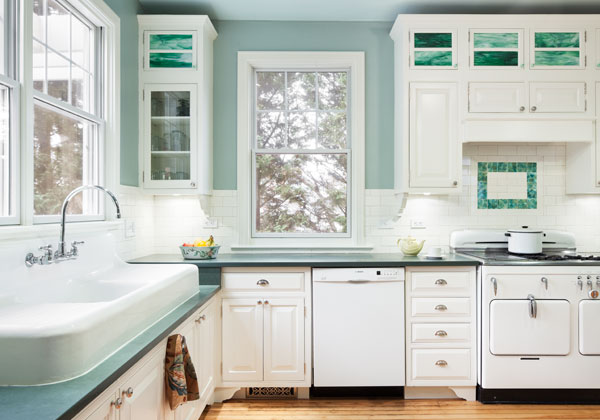 When her family moved from Paoli to Glenside, Fran Crotty knew she wanted to do a green remodel using as much salvaged material as possible. It was also essential that the renovation blend in with the historic character of the home.

The Crottys hoped to work with a green contractor who understood their vision as well as their commitment to salvage. After a few false starts, Fran was introduced to Brendan Jones from Greensaw Design and Build (215-389-0786, greensawdesign.com). In Jones, she recognized someone whose dedication to green design and salvage ran equally as deep. Most of Jones’ team—including project manager Niko Dyshniku—were trained as artists, so Greensaw also brought creativity and an artistic sensibility to the mission of turning a collection of disparate, lovingly-restored elements into a beautiful, functional space.

The partnership was just as exciting for Greensaw. “Salvage can be intimidating to people,” says Jones. “But with this project, Fran was already on the same page as us; she was already a believer. We’re immensely proud of the work we did. We feel like this remodel is the culmination of everything we’ve been trying to do.”

It all started with the cabinets—found on Craigslist.org, they were pulled out of house in Wayne that was being renovated. At the time, the doors were stained a dark brown and encumbered by heavy hardware, but the wood was high quality, and worth saving. After that, pieces started coming in from all over: butler’s pantries from an estate in St. David, slate from the old Philadelphia Women’s College (once used as lab tables), a sink from ReStore in Kensington and a huge piece of tin ceiling that would be used in two of the home’s rooms.

The project was hard work—months trolling the internet and architectural salvage warehouses looking for just the right pieces, hours spent chipping gunk off subway tiles and weeks without a functional kitchen—but it was all worth it. “It was totally a labor of love,” says Crotty. “Someone said to me recently, ‘Did you do all this to flip the house?’ I said, ‘Are you kidding me?! I’m never leaving this house. I’m staying here forever.’”