story by Lee Stabert“My passion is water,” says builder and master plumber Pat McDonald. “I can live without the lights being on.”
McDonald is co-founder (with his brother Tim) of Onion Flats, a sustainable development company based in Kensington that is revolutionizing the relationship between structures and stormwater in Philadelphia.
It all started in 2002, during the construction of Fishtown’s Rag Flats, an 11-unit project carved out of an old rag factory. Having found inspiration in cutting-edge European and Canadian design, McDonald hoped to build an integrated water management system. The only problem was that he couldn’t get a permit; in fact, there was no permit for what he wanted to do. While working his way through the red tape—and after earning tacit, off-the-record approval from a Philadelphia Water Department engineer—he installed a 6,000-gallon rainwater storage system. With the help of permeable paving and green roofs, the site became 100 percent permeable.
“About a year after the project was complete, that engineer from the Water Department called me three times,” recalls McDonald. “I thought he was gonna bust me on the project. Ultimately, he left a message, and said the Water Department wanted to give me an award. They also wanted me to come in and speak to the engineers.” When he addressed them, McDonald had his nine-year-old niece lead the presentation, hoping to proving the simplicity of his system.
“The bottom line is common sense,” he says. “If it costs a lot of money to do it, then it’s not common sense. As a plumber, it’s common knowledge that if you’re going to be considerate about the energy we spend as a society—in a country that uses so much—then you have to start at the bottom and consider everything we do that consumes energy. The reason why I did Rag Flats wasn’t initially because I wanted to use the water—I figured that if we had the water we would use it somewhere; it’s a garden community—but because I was preventing 6,000 gallons of storm[water] from going into the sewer system. It’s considered a combination sewage system, so as soon as water goes underground into a piping system, it becomes something to get rid of. But before it goes underground, it’s a commodity—one of the biggest commodities in the world.” 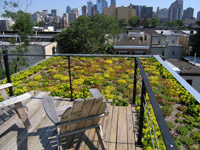 Inspired by that success, Onion Flats launched G.R.A.S.S. (Green Roofs and Solar Systems), an arm of their business that focuses on those two namesake areas as well as stormwater harvesting. They worked extensively with green roofs pioneer Charlie Miller of Roofscapes (based in Mt. Airy) to educate themselves on the subject. They eventually concluded it was possible to bring the technologies that have been successfully employed on large-scale commercial projects to private residences and small businesses. “The green roofing industry is a bunch of landscapers,” says Onion Flats architect and CFO Harold Steinberg. “And this is just an aside of what their specialty is. We, as builders, understand all the detailing that goes into a building.”
The motivation for installing permeable systems has never been greater—Philadelphia currently offers business tax credits for green roofs up to $100,000 dollars (or 25 percent of the cost of the system). “Incentivizing good practice is what’s going to transform the city,” argues Steinberg.
Steinberg and McDonald also give a tremendous amount of credit to the Philadelphia Water Department, lauding them for enacting legislation and instituting a forward-thinking culture. The next step is residential green roof incentives, and forcing a wider range of Philadelphians to manage their own stormwater.
The scope of the company’s ambition has grown in recent years. Through their close relationship with the Water Department, Onion Flats partnered with the Pennsylvania Horticultural Society to rejuvenate Northern Liberties’ Liberty Lands Park. The original plans ran stormwater into inlets, and then through a rain garden—Onion Flats felt that design didn’t go far enough.
“What we did with the community was design a rainwater harvesting system,” explains Steinberg. “So, through that rain garden, they’re now capturing 6,000 gallons of water that they can use to irrigate the park.” The Water Department is interested in monitoring the system to collect data for future designs.
The Liberty Lands project has had a broader impact on the entire area—that section of Northern Liberties used to flood after every big storm. “The water would just sheet drain off the old park,” recalls Steinberg. “As we started excavating, we found basements and subbasements of the former tannery building that covered the lot. There was nowhere for the water to go. We spent two months jackhammering. So, between that and the new system, the neighbors next door never get any water in their basement anymore. Ever.”
With another assist from the Water Department, Onion Flats is also in the process of implementing a citywide stormwater tree trench program. That system will capture streetwater runoff into an inlet, and underground pipes and stone storage will be installed between the trees. Water will be held, recharging into the ground and irrigating the tree wells. The pilot program will tackle 13 locations featuring 64 trees.
All these small projects can have a huge impact. “If you continue to build on an infrastructure with inadequate pipes, at some point the pipes will be too small and you’ll get backups,” explains McDonald. “You can do one of two things: tear up the infrastructure—all the streets and public properties—and put in bigger pipes. The American way. Or, we can look at our brothers and sisters in Europe who have survived a whole lot longer than our country. They don’t just keep adding bigger, bigger, bigger. They work with what they have and start adding permeability. It’s build bigger, or build smarter.”
Onion Flats believes they are at the forefront of a drastic change in the way we treat our water. “Water is going to continue to rise in cost—just like electricity, just like fuel,” says McDonald. “We’re going to get into a situation where architects and engineers will not make it through school without full points of view on how to manage water in the systems they create. At that point, it’s going to be a no-brainer.”

A change in affordable housing policy could be a game changer

It’s not only the Birds’ offense that’s generating firepower. The Philadelphia Eagles have announced a plan

Power Up: Energy Innovation at the Navy Yard

The U.S. Department of Energy has promised $122 million for a new “Energy Innovation Hub” at the

The upcoming expiration of PECO’s rate caps on electricity (happening January 1, 2011, in case you