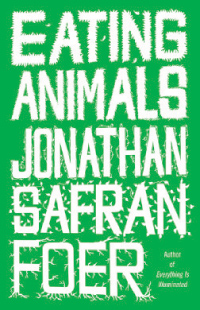 Little, Brown, $25.99
written by Jonathan Safran Foer
reviewed by Claire ConnellyJonathan Safran Foer has flirted with vegetarianism his entire life. Despite questioning the morality and cultural history of eating meat since childhood, the 32-year-old author of the popular novels Everything Is Illuminated and Extremely Loud and Incredibly Close wavered between omnivore and vegetarian for years until he became a father. Suddenly, dietary decisions became more than a personal choice, and he needed to discover for himself where the food Americans consume comes from, and whether or not meat should be on his son’s plate.

Foer embarked on a journey that would become his first work of non-fiction, Eating Animals. He traveled across the country to factory farms and slaughterhouses, documenting the ugly truth behind the meat industry. Eating Animals combines shocking depictions of animal cruelty with touching personal narratives about family traditions and experiences—from his relationship with the family dog to his grandmother’s escape from the Nazis. He utilizes masterful prose and sharp wit to drive home his realization that the process of bringing meat to our tables at a minimal monetary cost is inhumane and we can choose to avoid it.

Foer won’t convince everyone to become vegetarian or vegan (though the book’s message board boasts a number of converts). Eating Animals’ criticism of sustainable food experts like Michael Pollan and Foer’s sometimes in-your-face attitude will turn off some readers. But, regardless of your stance, the book is undeniably valuable for bringing critical issues of food safety and animal cruelty into the national dialogue. ■

Embrace your natural-born omnivorism. But leave the factory farms behind.

According to ancient yogic texts, peace is incompatible with the mass slaughter of animals