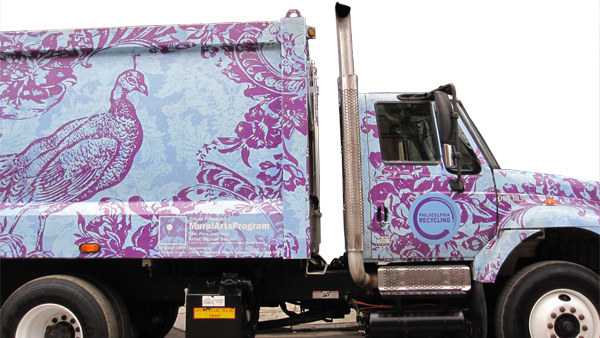 One of the most striking things about the Philadelphia Recycling Rewards Program launch was the trucks. Wrapped in vibrant, colorful patterns, the hulking behemoths were belle of the ball. That’s all thanks to a partnership between the Streets Commission, under the guidance of Clarena Tolson, and Philadelphia’s Mural Arts program.

A few years ago, Mural Arts was asked to commission murals for two trucks as a beautification measure. The trucks won a national award. Then, this year, as the city was gearing up to launch single-stream recycling, they wanted to raise awareness. They came to Mural Arts and asked them to do a whole fleet. “We wanted to make something bland beautiful,” says Director of Art Education Jane Hellman. The program was dubbed “Design in Motion.”

Everything at Mural Arts has a community element, so they enlisted the help of middle school kids in their after-school program. Through a partnership with Philadelphia University’s Design Center, the kids were able to learn about turn-of-the-century, locally-made textiles, and use those as inspiration for the trucks’ design. The kids also learned about the recycling process. On Earth Day, the city celebrated the new trucks with a parade down Broad Street and a dedication by Mayor Nutter at Love Park.

Future plans include 12 more trucks, done in collaboration with drivers, kids from the Mural Arts Program and local communities with low recycling rates.

A little while back, Hellman saw one of the eye-catching trucks cruising through her neighborhood. She struck up a conversation with the driver, telling him she worked for Mural Arts, then asked him what he thought of his new ride. “People talk to me now, like they didn’t before,” he responded. “They ask me about recycling.” ■

The Post-Landfill Action Network starts a chapter in Philadelphia

Where others see waste, local gleaning programs see food for those in need