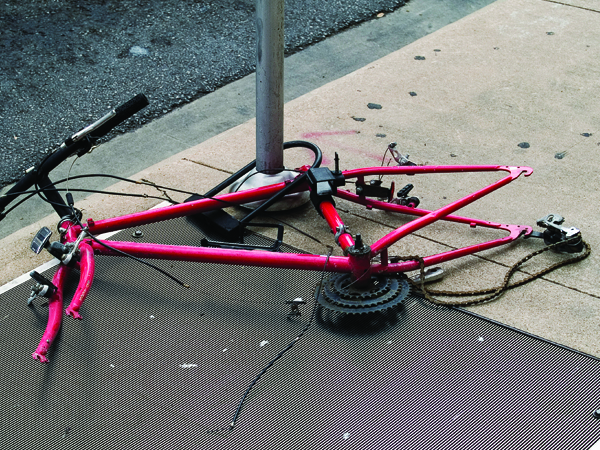 The lack of bicycle parking racks is obvious around much of Philadelphia; not only in front of commercial storefronts, but inside office buildings as well. This bike parking shortage makes biking to work or other destinations difficult, but additionally, it leads to more bike theft. In 2008, when Kryptonite Locks released its list of top 10 bike theft cities, Philadelphia won the dubious distinction of being the nation’s number one. Despite the lack of enough bike parking, bicycling as a mode of transportation is growing by leaps and bounds in Philadelphia. In fact, the Bicycle Coalition of Greater Philadelphia found that bicycling doubled within a three year period from 2005 to 2008.

The Bicycle Coalition also documented in 2008 how many public and private venues have either no (Pennsylvania Hospital), too little (Art Institute of Philadelphia), or poor-quality (Temple University Center City) bicycle parking. Philadelphia’s bicycle parking shortage is evident to anyone walking around commercial corridors and restaurant rows. Bikes are chained to trees, poles or gates, or doubled up on every available sidewalk inverted U rack.

Tackling the city’s bike parking shortage requires a two-pronged solution: first, to convince public and private property owners to install more bicycle racks throughout the city; and second, to require any new construction to create bike parking spaces as part of their building permit. This latter strategy was adopted by other cities with progressive zoning codes, including New York City, Chicago, Washington, D.C., Portland, OR, and Arlington and Alexandria, VA. Philadelphia joined its peer cities this past May when the City Council unanimously passed Bill #090190. The bill, introduced by Councilwoman Blondell Reynolds Brown, Councilman James F. Kenney and Councilman Curtis Jones Jr., was developed by the Nutter Administration in conjunction with the Bicycle Coalition through the Pedestrian/Bicycle Plan Steering Committee, which is charged with revising and updating the City’s Pedestrian/Bicycle Plan (due out in 2010).

The code also allows owners that provide sheltered (Class 1) bicycle parking spaces to reduce the number of off-street automobile parking spaces that they are required to provide by one for every five bike spaces provided on a lot, with a maximum reduction of 10 percent.

It’s encouraging that, going forward, any applicable development or construction project that pulls a building permit will have to install bike parking spaces. This guarantees that bike parking will no longer be an afterthought, but a key feature of Philadelphia’s architectural landscape. This new zoning code amendment contributed to Philadelphia winning a Bronze award for being a Bicycle Friendly Community from the League of American Bicyclists in July, and that is an important step toward making Philadelphia the “greenest city in America.”

Exposed: the Toxic Chemistry of Everyday Products and What's at Stake for American Powerby Mark SchapiroChelsea