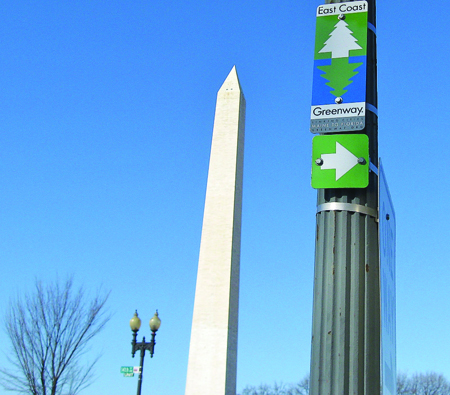 The urban Appalachian Trail is coming through Philly
by Will Dean

If you run across someone who has biked across the country, or even across state lines, one of your first thoughts might be of admiration—both for the difficulty of such an endeavor and for the uniqueness of it. A long-distance bicycle trip is kind of a novelty, only ventured by a few hardcore cyclists. On the east coast, though, that might change.

The East Coast Greenway is a planned trail system connecting Calais, ME with Key West, FL. In total, the Greenway will span almost 3,000 miles and provide a safe and reasonably quick way for people to travel along the east coast without motors. And it’s not just for sightseeing and long trips—the designers of this massive road-but-not-a-road envision people using it for everyday travel.

Anything without a gas engine is welcome on the Greenway, including bikes, wheelchairs, skateboards, rollerblades, horses (on some sections) and even that dorkiest of all methods of travel, Segways.

More than just an alternative way of getting around, though, the Greenway is a blueprint for a different kind of travel. In the way the interstate system defined America’s mid-20th century expansion and car culture, the Greenway hopes to make it easier for people to give up their internal combustion friends in favor of something, well, for lack of a better word, greener.

A highway without cars

Twenty-two percent of the Greenway is completed nationally, which means that it is paved and free of motorized vehicular traffic. Forty percent is complete in the mid-Atlantic area, which includes New Jersey, Pennsylvania, Delaware, New York and Maryland.

It is possible to bike along a route laid out by the East Coast Greenway Alliance (ECGA), the umbrella group that is organizing the entire effort, but it means a lot of travel on some often very busy roads. The ECGA has a route available on its website with tips on how to make the entire trip. Recently, a couple on recumbent bikes completed the trail in 55 days.

However, the Greenway isn’t just for the long-distance trekker; it’s designed for the everyday use of residents who live along it.

To help urban residents get around—and to showcase the Greenway to the large groups of people focused in cities—the route will go through all the major metropolitan areas on the east coast, including New York City, Washington, D.C. and Philladelphia.

For people without cars, the Greenway could be a way of getting around quickly without the danger of riding on roads dominated by fast-moving tons of metal and plastic.

According to Oliva, “It’s especially important in urban areas that people have access to a path to go to work, to get groceries and things like that.”

Although that will probably sound outlandish to many in Philly—where it sometimes seems like bikers, drivers and pedestrians have formed armed camps against one another—Finch takes the long view.

“We don’t have to convince anyone,” he insists. “It’s like any trend—you have the early adopters and they’re already out there, and unfortunately, those are some of the people getting run over by cars and buses in accidents, but just in the past few years we’ve seen a huge increase in people biking to work. There’s a lot more people wanting to do it, but they’re scared of competing for space with cars.”

For its proponents, the first step to encourage the use of a system like the Greenway is to build it. To paraphrase the famous line from Field of Dreams, “If you build it, they will bike it.”

“When you start providing better services, like bike lanes that are buffered from traffic, as they have in some parts of New York, then you’ll get my mom and my little nieces and nephews to go biking,” Finch says. “They’ll go bike to the store for some milk, go bike to work, go bike to the park. It’ll happen. Where you provide the services, people will use them.”

The Greenway imagines a way of traveling where alternative modes of transport aren’t just painted in as afterthought, like bike lanes with speeding cars on one side and parked ones on the other (where a hastily opened door can end your ride pretty quickly). The Greenway wants roads that are offset from car and truck traffic, but allow for quick and necessary travel (work, errands, etc.). And it wants to run that kind of travel right through the city.

Right through the center

The Greenway enters Pennsylvania around Morrisville (right by Trenton, NJ) and travels along the Delaware through Levittown, Tullytown and Bristol until it enters the city at Poquessing Creek. The future trail will go along the riverfront until it reaches Center City. There, the planners had an audacious thought: bring the trail through the busiest section of the city and out to Cobbs Creek.

At the East Coat Greenway Summit, held in Philly on May 8, the presenters talked about three possible routes to bring the Greenway through Center City. Spring Garden was chosen as the present route, because it’s wide and has existing bike lanes. Mere bike lanes, though, aren’t enough for the scope of the Greenway. Proponents want to use this opportunity to leverage change in Philly’s traffic system.

First up is another of the proposed routes: Spruce and Pine. These streets currently have two traffic lanes and space for parking. One plan is to convert one of the traffic lanes on each street into a buffered bike lane, meaning there would be a median between the traffic and the bike lanes, while retaining a parking lane and sidewalk space. The city will be undertaking this in August—probably by the time you read this—by repainting one of the lanes into a bike lane. Next year a buffered bike lane could be added, using existing repavement funds .

In the interim, Finch and others want to move the bike lanes on Spring Garden to the center of the street and have a buffer median between them and traffic lanes.

The ideal route, though, would travel along Market Street and the Ben Franklin Parkway, connecting riders to museums and other cultural attractions. This route would involve extensive changes to Market and the Parkway, which means confronting both bureaucratic headaches and the ire of Philly’s motorists (neither a group to treat lightly).

If completed, the plan—which includes buffered bike lanes, pedestrian walkways and plenty of trees—would be the first of its kind in any major metropolitan area in the US, and a symbol of Philly’s commitment to being the greenest city in America. Could it really happen here, though?

“New York did it on Broadway,” says Oliva, referring to the creation of buffered bike lanes and a pedestrian mall on the famous—and busy—New York avenue. “With the right political will, it can happ
en quickly.”

In Pennsylvania, almost 20 percent of the Greenway is complete, but in reality much of it is bogged down by obstructions. A high embankment, a railway crossing, a busy highway and a recalcitrant land owner are among the different hurdles the trail faces.

Enormous amounts of planning go into every mile of the Greenway, and each section requires different approaches and different partners.

In most of the northern sections of the Pennsylvania trail, it follows the old Delaware Canal, which the state administers. In those sections, the state already has the right of way, so it’s just a matter of getting funding, most of which comes from state conservancy departments and the federal Department of Transportation.

Another obstruction near US Route 13 in Bristol caused a bit of local controversy because the original plan to cross the highway involved building a tunnel, which locals thought could lead to an increase in muggings.

The tunnel plan has been changed to a bridge, but it’s just those kind of small problems, considering the size of the entire project, that can stall something like the Greenway.

“You have to have a lot of patience,” says Finch. “You have to be able to talk to a lot of different people and address their concerns. Sometimes, though, people are already doing things and tell us to go away, which is great.”

The benefits the Greenway can bring, though, are enough to keep up the spirits of the faciliatators. In addition to the travel elements, the trail creation is a way to bring improvements to underserved areas. In North Philly, the trail will turn abandoned industrial areas into green spaces, and includes the creation of a new park in Tacony, the first added to the Fairmount system in several decades.

PEC is currently working on adding a Greenway section to Southwest Philly along 58th Street to help connect the trail from Grays Ferry Avenue to Cobbs Creek. The area will involve the creation of a buffered bike lane and the planting of new trees.

“Southwest Philly is one of the poorest, most underserved communities; they have almost no green space to speak of,” says Finch. “Someone who wants to open a store there might think, ‘maybe not,’ but then they see the strip of green and take another look at the strip mall near our 58th Street connector.”
The Greenway will also connect with other existing trails out into the suburbs of the city, perfect for commuting to work or visiting historical sites like Valley Forge.

“We can start connecting people from Delaware County and Darby to commute to work in University City or Center City,” says Finch.

Organizations like PEC and the national coalition have been working on the Greenway for a long time, and will be working on it for much longer. “The Appalachian trail took 80 years,” notes Oliva.

After the planning summit in May, Mayor Nutter joined attendees for a bike ride along the path of the Greenway. The ride went along the Schuylkill from Locust to Eakins Oval and onto Spring Garden (although Nutter only rode for a few minutes before stopping for a photo op and then leaving).

Nutter was a fan of the Greenway plan, especially since almost all of the funding comes from state, federal and private sources and not the city, and the different routes through the city mesh with his promises to make Philly more bike-friendly.

On the trip along Spring Garden, though, some motorists yelled at large groups of bikers for blocking right hand turns while crossing intersections, and other perceived slights. That reaction demonstrates both the existent antagonism between the differing modes of transport in Philly and the inadequacies of our present bike infrastructure.

All the more reason to add the Greenway to the city, according to Finch. “Wouldn’t you love to have a greenway right at your doorstep?”

Exposed: the Toxic Chemistry of Everyday Products and What's at Stake for American Powerby Mark SchapiroChelsea