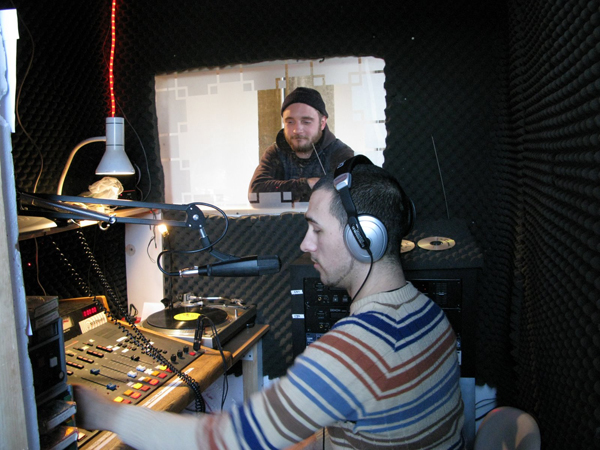 With TV waves going digital this February, Nexus/foundation, an experimental artist collective, thought it might be time to go old-school. So they turned their gallery, located in the Crane Arts Building (1400 N. American St.), into a low-frequency AM radio station for the months of December and January. Their control room, made of 100 percent salvaged materials, has chalked up two months of community- and arts-based programming. “When researching this project, we realized that radio’s original use was to promote community broadcasting and community education,” explains Nexus artist member, Bilwa .
The December 11 opening reception served as an on-air party encouraging people to “bring your own shout-out.” Anyone could go on air and indulge in some self-promotion. Planned broadcasting includes a show called “Open Borders,” where students of North Philadelphia High School interview local immigrants. The station’s also presenting original radio dramas like “Yard Songs,” a history of trains and their effect on Philly neighborhoods, and “Pangea,” an “Orson Welles-type” preview into the in-progress opera of Michael Mc Dermott, owner of the earSnake record label. Overall, Bilwa describes the radio project as “an ode to radio, by embracing technology that has fallen by the wayside.” By tuning into 1650 AM on your radio, you might be able to hear some of technology’s past, loaded with Philly’s cultural future.