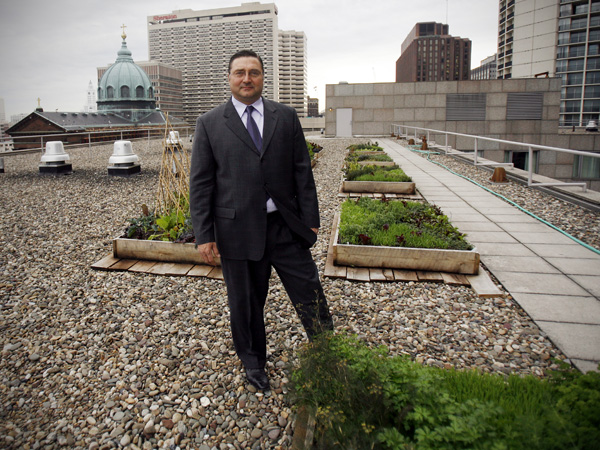 If the typical luxury hotel is a gaping hole of conspicuous consumption, then Philadelphia’s Four Seasons Hotel is anything but. With its hugely successful composting program, a commitment to reusing cooking oil, an aggressive commingled recycling program and a brand-new cogeneration system, it sticks out like a green thumb.

And that thumb belongs to Marvin Dixon, the hotel’s director of engineering.

“People always think that luxury means waste… and one of my goals is to try to change that image,” says Dixon. A Kentucky native, he remembers plowing his grandfather’s field with the help of Kate, the family mule, and religiously composting. “[My grandfather] had a great green initiative back then; we just didn’t know it was called sustainability!”

Dixon, who joined the hotel staff just over five years ago, relaunched the Four Seasons’ stalled green initiatives. Over three years of work, Dixon has led the hotel staff in converting more than 430,000 pounds of kitchen waste into compost. Some of that compost makes its way back to the hotel in the form of rich, nutritious potting soil, filling the beds of chef Rafael Gonazles’ new rooftop garden.

Not satisfied with composting, gardening, recycling over 100,000 pounds of material, reusing over 125 gallons of cooking oil per week (largely in Dixon’s oil-powered Ford F-350, which he uses to haul the hotel’s compost to Montgomery County), reducing water consumption by more than five million gallons and lowering overall energy consumption by more than 20 percent, Dixon continues to search for ways to make the hotel even more efficient.

And that quest led Dixon to cogeneration, which efficiently combines heating with power. Cogeneration isn’t a new technology—it was widely used at the turn of the century, but largely abandoned when purchasing electricity from power companies became more convenient. Dixon’s turbines mark the first of their kind to be installed in a Philadelphia hotel.

This new gasoline-powered turbine system generates 25 percent of the hotel’s energy for 20 percent less than it would cost to buy it from PECO. On top of that savings, it captures 1,200,000 BTUs of heat produced hourly by the turbines that would otherwise be lost. To put over a million BTUs into perspective, the typical South Philly rowhome’s furnace emits about 80,000 BTUs. Dixon, however, looks at that captured heat in another way: “That’s enough heat to make all of our domestic hot water and to heat our building through the spring and fall heating season.

“Being in the hotel business since 1978, I’m always looking at better or more efficient ways to do things. I just think cogeneration is a perfect fit for any hotel operation,” continues Dixon. “If you produce your own electricity and you have a place to use that rejected heat, then you’re a winner.”

Forests and fields provide the color behind the Honest Alchemy line

Go Solar, Philadelphia (And Here’s How)

Jobs: A Matter of Degrees