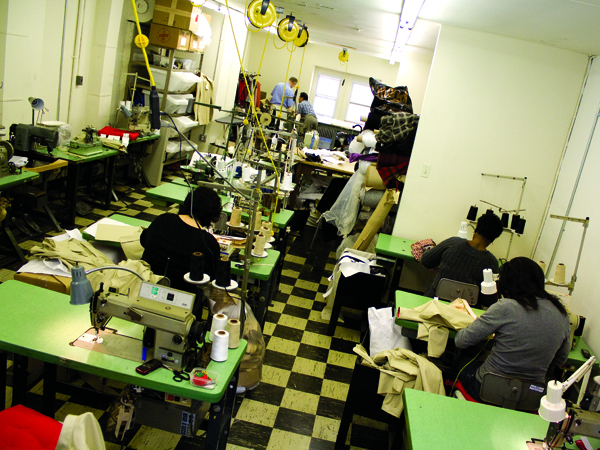 Upstairs from a posh center city boutique is a small garment factory. There is a hefty metal cutting table along the right wall and a couple rows of sewing machines. There is a machine that folds collars, and one that attaches clasps to pants. There are huge rolls of fabric, stacked in a kaleidoscope of circles and colors. And there are people making clothes.

Sa Va Fashion is a company that makes what they sell. It sounds like a simple idea—but it’s one that has gone out of practice in recent years. In a building on the 1700 block of Sansom, designer Sarah Van Aken and her staff brainstorm ideas and conceptualize the clothes. Then, in an intimate space across a small hallway from the company’s offices, pieces are cut, sewn and finished. Every day, at least one new item emerges from upstairs to be added to the racks in the ground-floor boutique, which opened for business at the end of September.

Using only fair trade or organic fabrics and producing hyper-locally makes Sa Va a model for 21st century sustainable enterprise. But there is also something decidedly old-school about this paragon of (literally) vertical integration—it harkens back to a time when American cities still made things, and didn’t just sell them.

Van Aken was born outside of Reading. Her grandparents owned a dairy farm, and her family was always making things. “If we needed a new shed, we just went out and built the shed,” explains Van Aken. “Everyone in my family sewed. My mom used to make all of our clothes growing up, and my grandmother made quilts.”

Van Aken studied ceramics and sculpture at the University of Delaware. After graduation, she moved to New York, where she worked an entry-level job at a garment wholesaler, doing technical design and production. She eventually moved back to the Philadelphia area, hoping to focus on her artwork, but ended up managing restaurants to pay the bills. Then, five years ago, she decided it was time to pursue her vision for a line of women’s clothing. All she needed was a plan.

“No one was going to give me the kind of capital I needed to launch a women’s brand,” says Van Aken. “I think things might happen differently now, but for the last five, even 10 years, you started a brand because you were a celebrity, or you worked as an understudy for a big designer, or you were an editor at Vogue. None of those applied to me. Also, I didn’t want to have the same type of company. I was out to do something different.”

So, she got creative. She started a men’s custom shirt business (under the name “Van Aken”) because she could get it off the ground for around 10 grand. As that grew, she also began designing custom hospitality uniforms for upscale restaurants.

Shortly after launching the shirt business, Van Aken opened a fair trade garment factory in Bangladesh. There were instant challenges. She could only travel there four times a year, leaving her with little control over day-to-day operations, and turnaround could be unpredictable.

Last summer, things reached a breaking point. Production issues were taking up more and more of her time and energy. “I thought to myself, if it’s gonna be like this—with the stress and the travel—then I don’t know if I can do it for the next 10, 20 years of my life,” she explains. “Making clothes for the sake of making clothes and traveling around the world was cool for a while, but what is it going to do for me in my 30s? Nothing. I wanted to have an impact.”

Like many others, Van Aken felt galvanized by the 2008 presidential election. “I had two choices,” she says. “Scrap this and do something else—maybe work for a nonprofit—or turn this business into something with more meaning.”

Confronted with a pair of major issues—streamlining production and integrating her company into the community fabric—Sarah Van Aken resolved to make her clothes in Philadelphia.

Through some serendipitous networking, Van Aken connected with Karen Randal, Philadelphia’s new Director of Commercial Development and Attraction. With Randal’s support, Van Aken was awarded a Community Development Corporation grant from Philadelphia Workforce Development. “There are a lot of people in Philadelphia who know how to use sewing machines—a lot of factories went out of business in just the last few years,” explains Van Aken. “But there aren’t a lot of people who have experience making the whole garment. They’re line sewers. One person might know how to make the collar of a shirt, and another, the cuff. The kind of work that I do—doing small runs—you need to be able to work on the whole garment.”

The grant paid a sewing instructor for the first eight weeks, and helped recruit the eclectic workforce. Sa Va employs a white American male, an African-American woman, as well as people from Ivory Coast, China, Vietnam, Thailand, Cambodia and Eastern Europe. “I love the diversity,” says Van Aken. “And they communicate through sewing.” Sa Va will eventually create 22 full-time jobs.

Local production isn’t the only way Van Aken hopes to engage the community. She has a deep commitment to volunteerism, and plans to make the store’s website a resource for like-minded folks. She works with People’s Emergency Center in West Philadelphia, which provides services to homeless women and their children, and has partnered with Career Wardrobe, which supplies professional attire and career skills training to women in transition. “That was obvious for me,” says Van Aken. “If I’m considering all these elements of the life cycle of a garment, I should tackle the whole life cycle.”

Eventually, she will even offer incentives—like rewarding customers who volunteer in the community with a free “garment of the month” or donating a percentage of some proceeds to community organizations. Van Aken hopes these efforts, along with the style and wearability of her product, will help Sa Va stand out in a crowded marketplace.

The rough economy remains a challenge, but people need clothes, and some companies at a similar price point, like Anthropologie, are still doing well. “I think what we sell is really great,” reasons Van Aken. “And it has a totally different story, which gives people a little bit of added value.”

The boutique’s products all boast elements of sustainability—whether it’s organic, locally-made, fair trade or recycled. A tag on each garment features a checklist of those production details. The clothes themselves are organized in “mini-collections” and categorized by function: Saturday, workday, night out or dress-up. There is something for every occasion.

In the end, style is what sells clothes, but one of the most emotionally resonant effects of the sustainability movement is rediscovering where the objects that populate our lives actually come from. At Sa Va, you don’t need to think about the miles your purchase traveled or how much the people who made it were paid. The workers are upstairs, they have health insurance and the garment came down in the elevator.

Architecture: What is a Green Roof?

Philadelphia, The Once and Future Workshop of the World?

Back Page: The Joy of a Local Living Economy

Book Review: Inquiries into the Nature of Slow Money

Inquiries into the Nature of Slow Moneyby Woody TaschChelsea Green Publishing; $21.95
Our world economy revolves around